When 76105 The Hulkbuster: Ultron Edition was announced in mid-February, it was the cause of both some serious excitement and a lot of not so great feedback. Based on the monster version of Iron Man’s suit in Avengers: Age of Ultron, 76105 The Hulkbuster: Ultron Edition includes the eponymous Hulkbuster, as well as a display platform with a couple of robot arms, a table and holographic screen, a little hot rod, a Veronica satellite and an exclusive Iron Man Mark 43 minifigure.

Inside the gigantic box you’ll find (only) nine numbered bags, one un-numbered bag with larger parts, an instruction manual, and a sticker sheet with 20 stickers. The stickers aren’t too bad, although there are a lot of them. The majority of them are transparent stickers, which does make the model look better. With coloured stickers, often the colours don’t quite match. Also included is a UCS-style display plate sticker. While this isn’t branded as an Ultimate Collector Series set – they’re usually set aside for Star Wars sets – the style of set would fit with the UCS family quite well, although there are a lot of stickers. Let’s just call this the non-UCS UCS Hulkbuster.

The exclusive minifigure is the Mark 43 suit, and it looks pretty darn good. The Mark 43 is the suit that’s featured in Age of Ultron, and is the suit that’s worn by Tony Stark when inside the Hulkbuster (also known as the Mark 44). It’s got the colours of dark red, silver and gold and looks pretty good in LEGO form. It’s a shame there’s no arm printing, but there is printing on the back, as well as the silver chest plate that fits around the suit when inside the Hulkbuster. 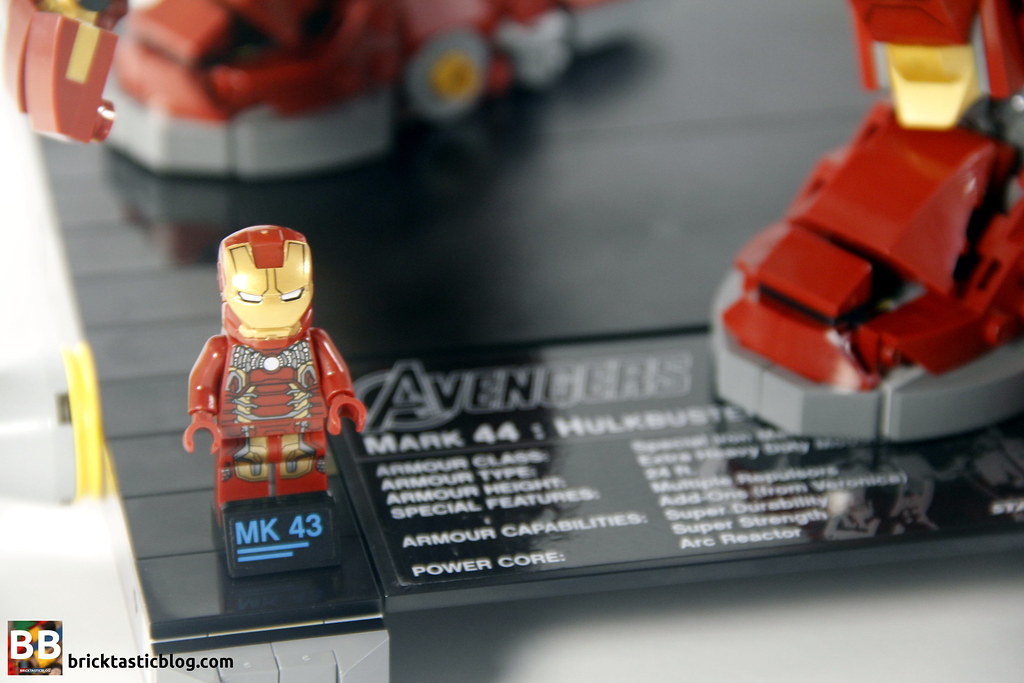 It’s interesting to note that while exclusive to this set, it isn’t the first time a Mark 43 suit has appeared in LEGO. There was another one in 76031 The Hulk Buster Smash. I know the name isn’t right, and don’t get me started on that Hulkbuster, but at least they attempted the cage Veronica drops on the Hulk. Anyway, the previous version of the Mark 43 had a little less detail on the legs, and of course no silver chest plate. Inside the head is a clear minifigure head element.

The parts included are predominantly in dark red, with a huge selection of different elements in pearl gold. Some unique elements to this set include the printed large domed head of the Hulkbuster, two 2x8x2 bowed bricks, a great selection of 2×2 reverse bowed plates, and what I’ve decided to call the reverse 2×3 shield with bar, all in dark red. The reverse 2×3 shield has been seen before, in white, in the latest version of the Millennium Falcon, so for those of us that couldn’t afford to remortgage our houses, it’s very hard to find. The domed head is the only printed part in this set, apart from the minifigure. There’s also four rare TECHNIC shell pieces used in the Veronica model, and loads of angled bricks and plates in dark red.

Other rare parts include dark red slide shoes, only seen in 10258 London Bus, 1×3 double jumper plates, and a good amount of 1×2 bowed curved plates with cuts. These have also only been seen in one other set, funnily enough it’s another Hulkbuster set, 76104 The Hulkbuster Smash-Up. For me, some of the surprising inclusions were the droid torsos seen in the arms, and the phone handsets seen all over the model. There’s also a light brick, seen in the torso, and the 1×2 plate with rounded edges. These have been spotted in a number of 2018 sets, but this is the first lot for me.

To be honest, I’m rather disappointed with this set. Yes, it looks imposing and impressive sitting on a shelf, but the poseability and articulation (which in this case is it’s swooshability), is severely lacking. The shoulders and arms are fine, and can be posed in a good variety of ways. The torso can also be rotated at the hips. The problem lies in the hips, legs and ankles. 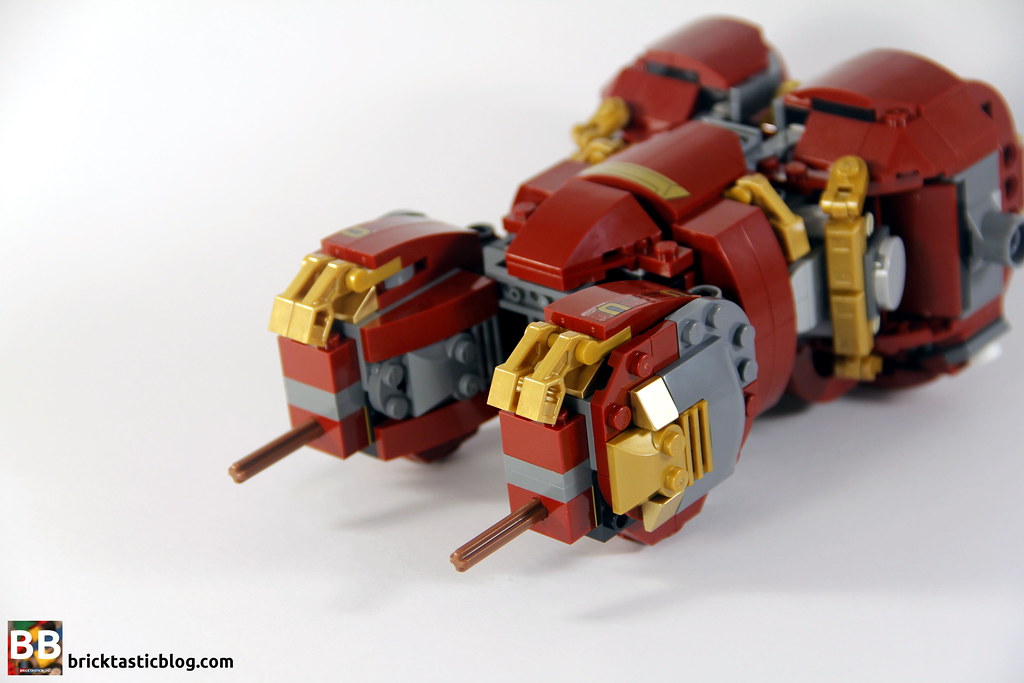 Due to the double click-ball joints, there’s no forward motion at the hips. They can be splayed out, but not forward or back. Not that this matters though, as the main problem is in the knees. The legs of the Hulkbuster are rock rigid – no knee joints! The ankles are also very weak. The model gave me a number of little heart attacks as I was positioning it for photos and display. Every time I’d stand it up and position it, it’d either fall forwards or backwards! It’s a real shame, and took me a very long time to have it standing up without a lean. It’s possible, but very frustrating. 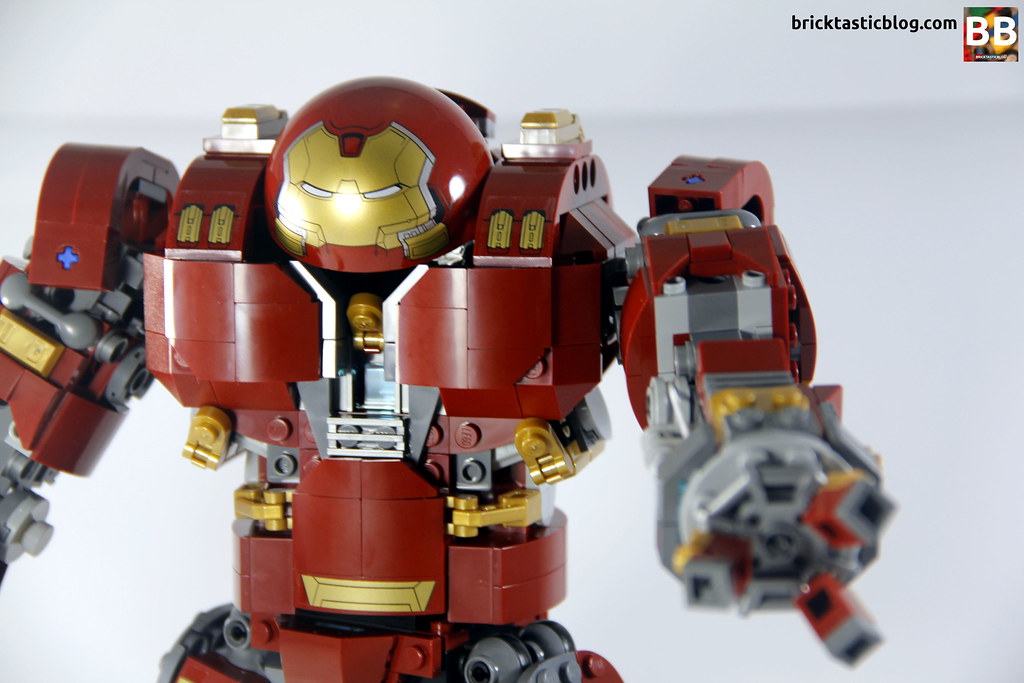 Other details on a more positive note – the light brick is a nice touch, but it’s not got the same glow as the arc reactor should have – more of an orange rather than a very light blue. I like the option to swap arms from a standard arm to the jackhammer punch arm, otherwise known as the Go To Sleep arm! It works on an elastic band and is simple, but effective. It’s also possible to pop the Mark 43 inside the Hulkbuster. There’s enough space and a very simple looking HUD setup in the cockpit. 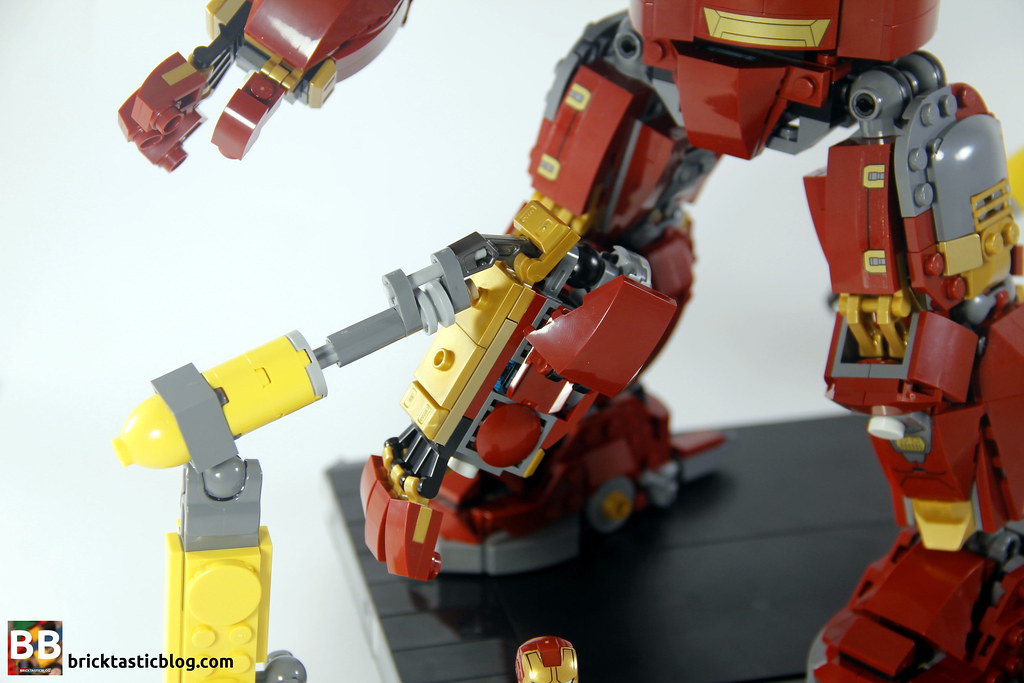 There’s a small amount of play in the display stand, too. The robot arms have a good amount of articulation, and can hold the spare arm without breaking. There’s also a hot rod (for some unknown reason), and the Veronica satellite, sitting on a desk with a nicely executed fancy screen display, and a very large fire extinguisher. 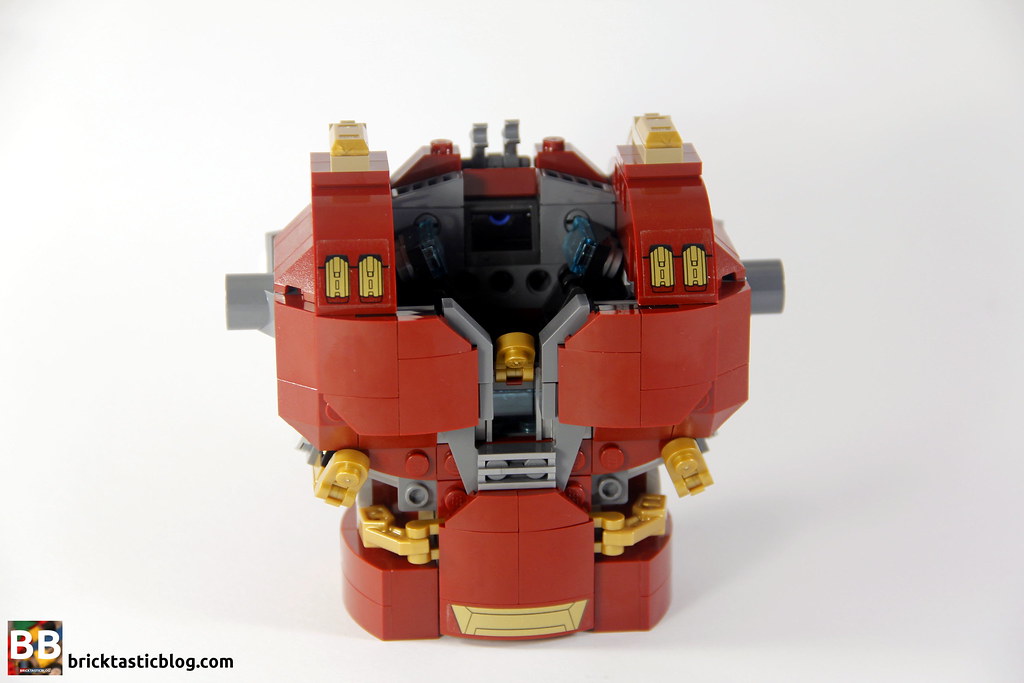 The build process starts at the torso. There’s a serious amount of SNOT work all through the build, but the most is in the torso. There’s the aforementioned cockpit, with the light brick sliding in underneath. The torso is made up out of two bags, so it takes a little time to get the first body part done.

The entire rest of the model is repetitive, due to it’s symmetry. While they’re mirror images, there’s still repetition. It starts with the feet. There’s a ton more SNOT, and the shaping, especially from the front, is excellent. What’s even better is the little tyre just hiding underneath the sole of each foot, making sure there’s no forward or backward slippage. It’s a superb inclusion. 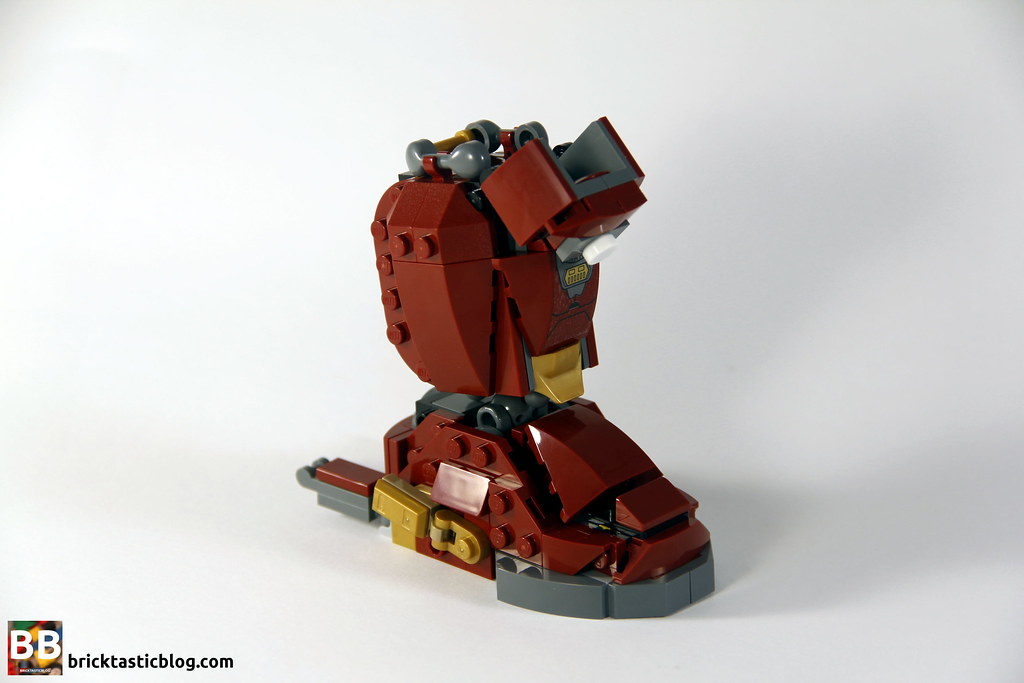 The detail works up through the legs, starting with the lower leg sections. These are joined to the thigh sections with a TECHNIC axle, hence, no knee joint. There’s a visual knee joint, really just a moveable section that houses the extra arc reactors. Instead of light bricks, there’s glow in the dark round 1×1 tiles. 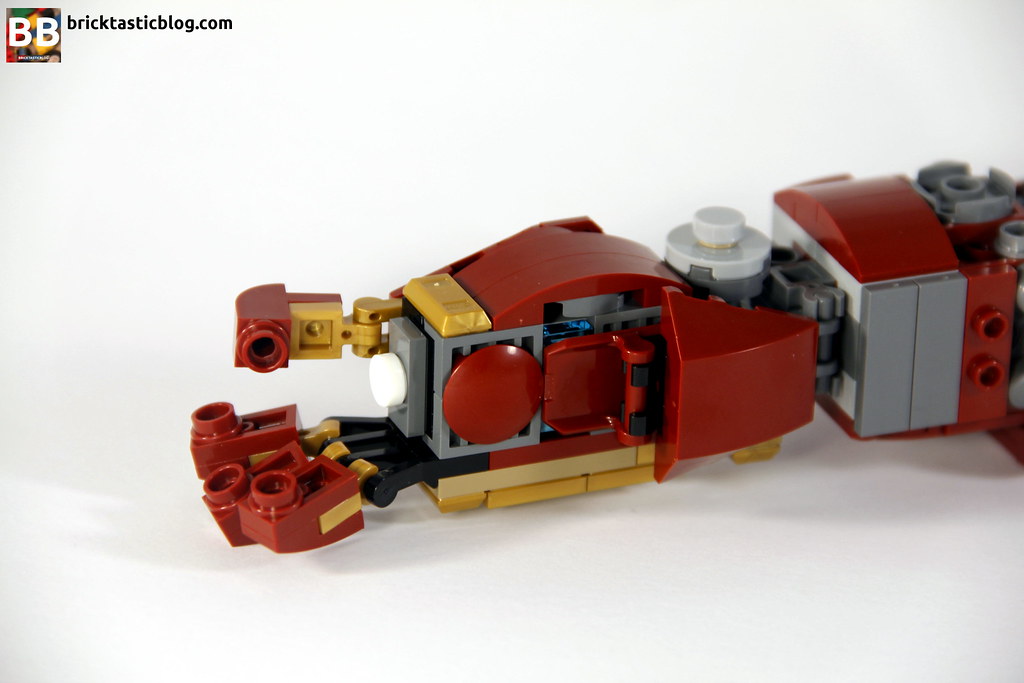 The arms are next, with the build including more SNOT. The elbow joints are somewhat bare and skinny, which makes sense, although it doesn’t look great. With chunkier elbows, there’d be less articulation. There’s also much less bulk to the hands, which look awkward and clumsy. 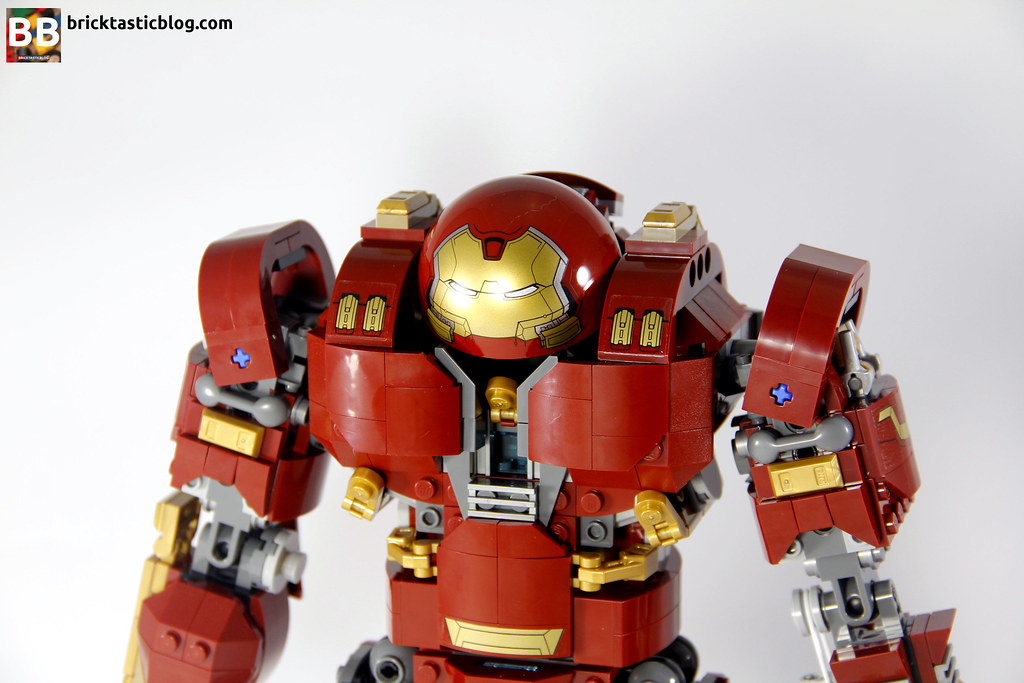 The shoulder pads are also on a pivot, which makes them adjustable dependent on where the arms are. The head is added, although the hinge for this is also quite awkward, and doesn’t shut neatly – it takes a little fiddling to get it sit right. 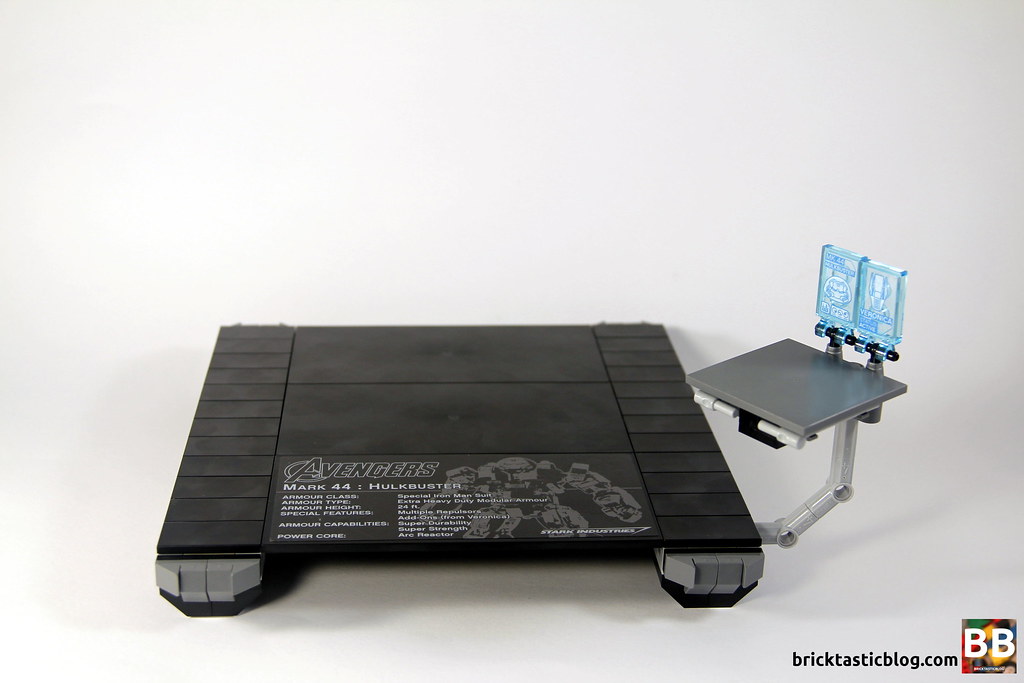 The final stages of the build relate to the display platform. This is thrown together very easily, although I love the extra tyres used for grip, just like under the feet of the Hulkbuster itself. It’s a nice platform, and is a great way to display it, although I found there wasn’t much room for posing with the display plate in a vertical position. 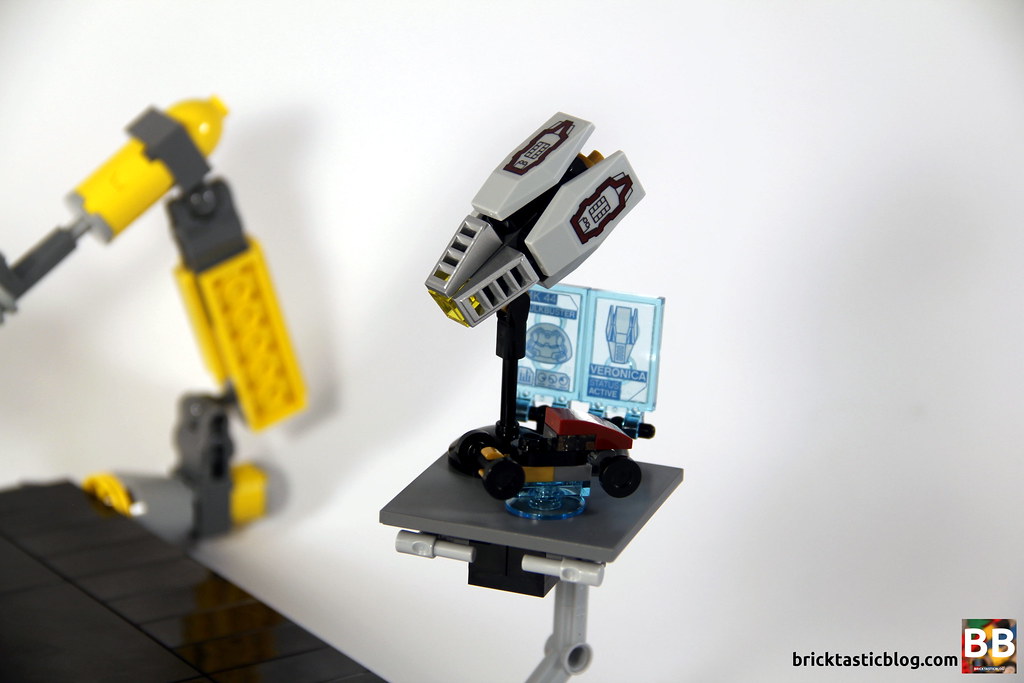 The display includes the table and robot arms, all of which look good for secondary builds. These can also be moved around to different positions on the platform.

What I will say is that this is a model that’s very exciting to watch rise off the table. As it gets taller, it gets more exciting, although there are some serious downsides during the experience.

The detail and appearance in this set is where it gets let down the most. The proportions are the main issue – they’re all wrong. Let’s work our way down. The head is too big, the shoulders way too small – you could say non-existent – and the arms are not chunky enough. 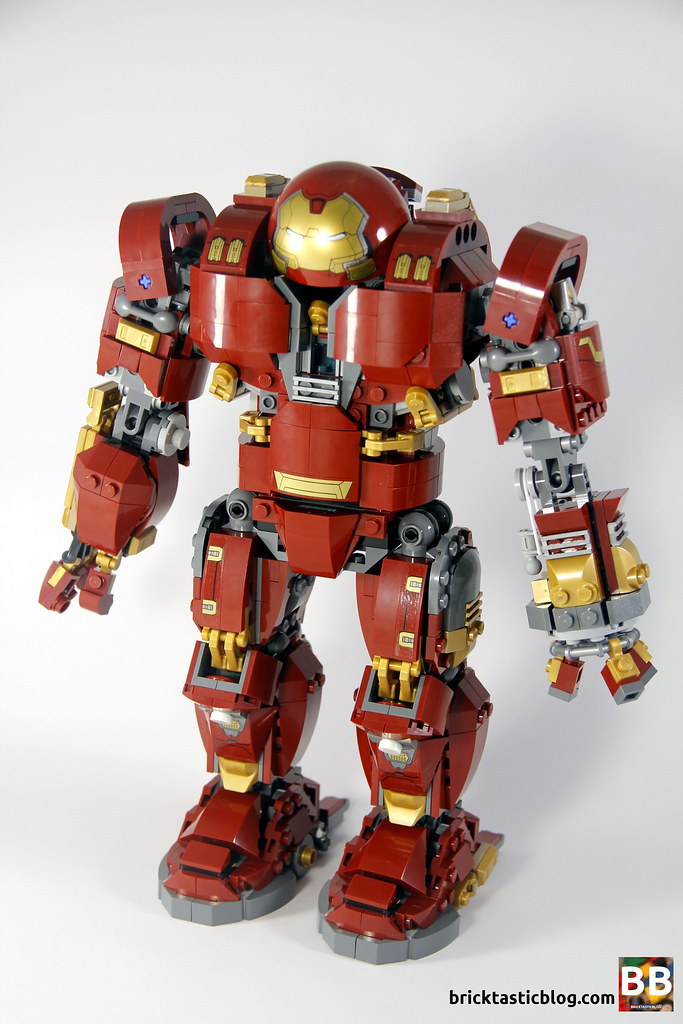 There’s also the issue of the visible blue TECHNIC pin on the shoulders.  The fingers and hands are tiny, and the gauntlets on each forearm are far too small. The chest is not broad enough, and the hips and legs are woefully small and skinny – Hulkbuster clearly skipped leg day. 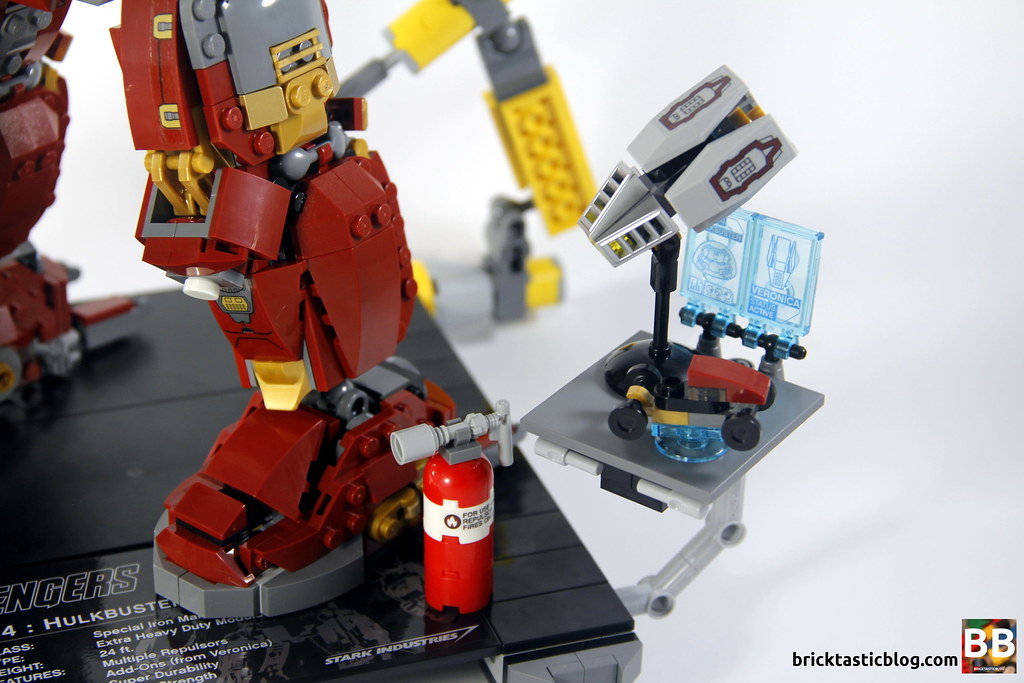 The gold touches are in the right place, but there wasn’t enough bulk put into it. It is interesting to note that while it looks much smaller on the official images, it isn’t that bad in person. It’s much better than what it seems. Don’t take this set on face/box value. It is better than it may seem, although not as much as you’d hope. From an angle, the hips are passable at best, but from straight on, there’s nothing there. It’s somply too small.

I like the adjustable shoulder pads, but simply from that there could have been more shielding projected over the arms and closer to the torso. Look, it’s not a disaster. It’s not great, but it still is an imposing build, and will draw the eye to the display. It’s still got that cool factor, and many fans may not even notice the differences.

Simply at face value, looking at price per element, this set comes in at 14c per element. That’s at the cheaper end of the scale. The Hulkbuster is a great parts pack for dark red parts, tiles and SNOT elements, and even if you weren’t a fan of the original set, you could definitely modify it into what the Hulkbuster should and deserves to be. To be honest, given the issues with this set, I’m not anticipating massive sales of this one, however there will be a good fan base, so the set should increase in price after retirement, but I don’t think it will be a big jump in value. 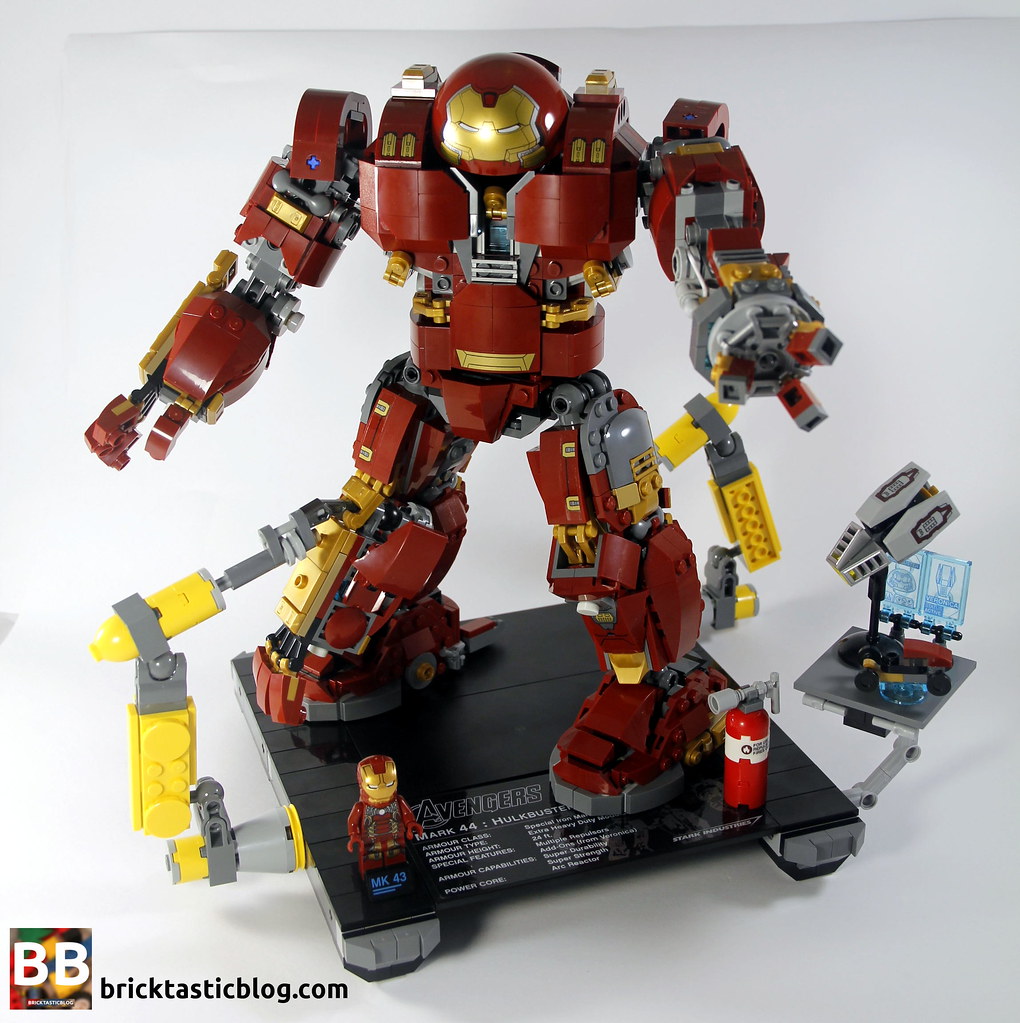 While there is the definite pull from the Marvel fan base, as well as purely having other mechs (and yes, I classify this as a mech) available in the LEGO product range, I don’t think this will have the widespread love LEGO originally anticipated. Some fans may get it simply to fix the problems with it, others will get it because of the Marvel brand, and still others will pick it up purely on the Hulkbuster coolness factor. I think for the Marvel fans at least, this should be one to collect, regardless of the issues.

It’s not a great score, but still not a bad score. There was so much potential with this set, it just fell a little short of the mark. I still look at it and am impressed at it’s size – it could just have been bigger and better.

A special thank you to LEGO for sending me a copy to review. All thoughts on this set are my own are are not influenced in any way, shape or form. The provision of sets for review does not guarantee a favourable review.