The LEGO community is full of people doing amazing things with LEGO, and it’s really hard to keep up with it all. The Builder Spotlight series aims to highlight not only some seriously amazing MOCs, but the builders themselves, and their inspirations! This time, I’m talking with Koen, otherwise known as Swan Dutchman.

Tell me a bit about yourself!
My name is Koen, but within the LEGO community I am better known as Swan Dutchman. I am 30 years old, am living in the Netherlands and am a member of a Dutch LUG called Lowlug.

How did your love of LEGO come about, and how long have you been a fan?
LEGO is one of the things I grew up with. As a kid I used to play with LEGO a lot. I especially liked the Castle and Pirate themes. However it was only about 6 years ago I started building my own creations.

Did you go through the dreaded Dark Ages, and if so, what brought you out?
Oh yes, at the age of 12 I even sold all my LEGO!… I still regret it. That said I did get a major part of my childhood LEGO sets back by buying LEGO from people my age whose kids don’t have much interest in their parents’ LEGO… lucky me!

It’s kind of a weird story what brought me back. About six years ago I had to go to the hospital for some minor surgery with the prospect of not being able to walk much for one week. I dreaded to be bored that week and thus I was looking for an activity that would take several hours that I could do while sitting with my legs up. At the same time I was also looking to have something like a ship on top of my bookcase, because it would look so cool. To summarize: that’s when I got my first LEGO set as an adult which was 4195 Queen Anne’s Revenge. I was impressed with the new shapes and colours LEGO had in those days and got very enthusiastic. Soon after that I purchased a big party of second hand LEGO and started building my own stuff.

Do you have a favourite LEGO theme or MOC subject matter?
I like to build all sorts of things except modern warfare builds. Most of my MOCs have something to do with things I think are fun like Disney, games and movies.

Do you have a favourite MOC (of your own)?
Oh, now this is a difficult question to answer since I like all my MOCs… otherwise I simply wouldn’t build them. However, the gingerbread house is definitely a favourite. 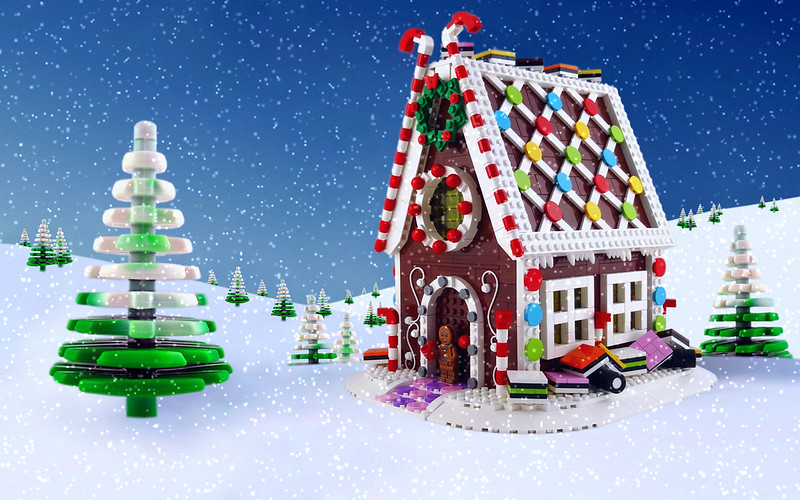 Any challenges in building them?
One of the things I like about LEGO is that everything I want to build has it’s very specific challenges. A couple of examples: how to make a sturdy and seamless angled Star Destroyer?; how to make curvy jewelled eggs that can open?; how to make a small castle that still has a lot of detail? 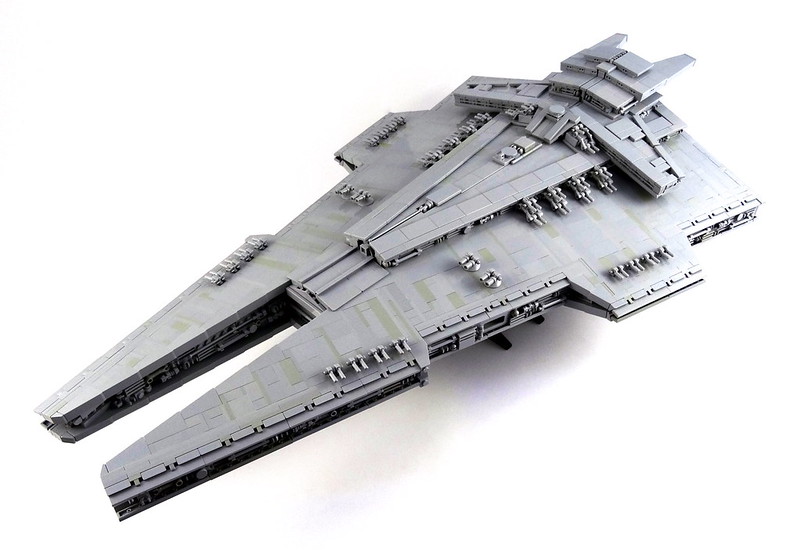 How long did they take to build?
The building time varies between a day and a year depending on the size, challenges I come across and my building experience. A few examples: gingerbread house – 1 month; Star Destroyer – 5 months; a cuddly toy – less than 1 hour; Cinderella Castle – 3 months, Efteling People of Laaf – about a year.

How many elements are there in that MOC?
The gingerbread house contains about 1500 parts.

Any favourites from other builders?
There are so many awesome builds from fantastic builders. I faved hundreds of them on Flickr. 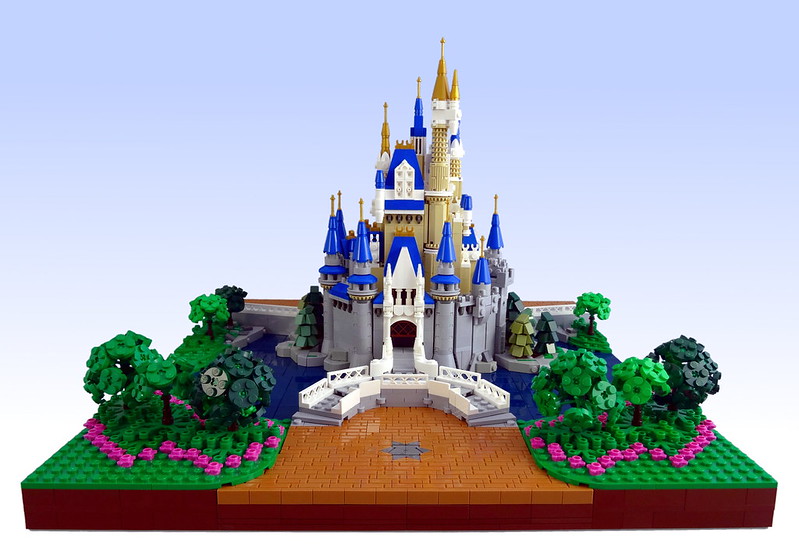 The building process is the same for almost anything I build and can be divided in 4 stages: idea building; designing, collecting and building. ‘Idea building’ is the stage where an idea pops up. The first thing I do is making some sort of digital mood board or gather all sorts of reference material in case the idea is to be a LEGO replica of something existing (like the Disney Castle).

Next thing I do is determining the scale by tackling a very specific part of the object. For the Disney Castle it were the towers of the outer wall that determined the scale. During the ‘idea building’ stage I determine if the build is feasible. About half the ideas I have are rejected because of technical issues or because the colours I want are not yet available. 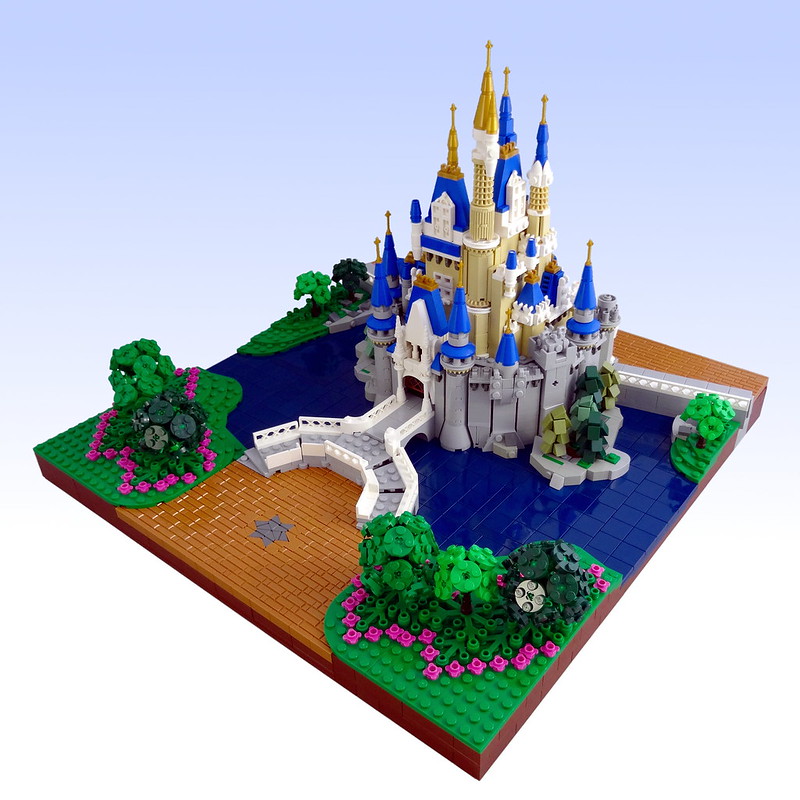 The next stage is the design stage which is also the longest stage. I go back and forth building real life and digitally using LEGO Digital Designer. I build real life using parts in any colour I have (considering the parts are available in the correct colour in the end) just to test certain building ideas or to test how strong a build is. I use LDD to save the design and to keep improving the model with details. I find this much easier to do digitally, because I won’t have to demolish the whole model just to make a small improvement.

After the design is ready I start collecting the parts I need to make the complete build. During designing I already considered part availability and pricing. Some Bricklink orders will do most of the time. Next is the actual building stage using the saved design in LDD. It’s always a pleasure to see the digital build come to life in real bricks.

What are you working on next?
Something dark and sinister from Lord of the Rings. 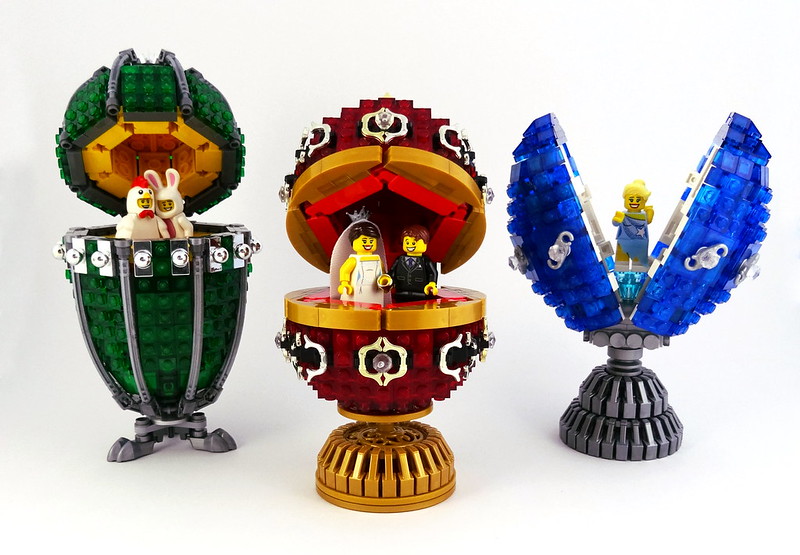 How can we keep up to date with what you’re working on and what you’ve done?
You can find my MOCs on Flickr and Facebook. I usually don’t post anything about what I am working on unless it’s a really big MOC.

Any advice for fellow LEGO fans?
Got an idea for a new MOC? Just go for it! Don’t worry too much if the MOC isn’t 100% the way you want it to be. Over time your buildings skills will improve and your knowledge about parts will expand. And get involved with fellow LEGO fans! It’s fun, inspiring and educative as well. Most important is to enjoy yourself with LEGO!

Thanks very much for your time Koen! It’s always great to read about someone that’s as excited about LEGO and building as we are. Go and check out the rest of Koen’s work on Flickr and Facebook. You’ll be amazed!